I planned to start my day as early as on a normal workday on this my free Friday, but the alarm woke me out of deep sleep and disrupted an interesting dream. Like most people (I guess) I only remember my dreams if wake up during the dream or straight afterwards. This dream was a sci-fi apocalypse. A weird explosion on a planet far away was mirrored in the sky of my own planet (could have been Earth, maybe Iceland – why Iceland? Beats me). The image in the sky was the signal for the end of the world. Society fell apart. In the dream I was a teenager, hiding from a mob of looters with a gang of children. We made it away from the looters into a prosperous neighbourhood where nobody had yet an inkling a horde of looters was about to engulf them. In the back of my dreaming mind was the thought that the explosion on the far-away planet could be undone, as there was a time manipulation element to the situation. Then, alas, the alarm woke me, and I don’t know how the dream would have played out. Maybe one of these nights it will resume.

Anyhow, I was still so sleepy that I reset the alarm to give me another 30 minutes, which grew to 45 minutes because I didn’t hear the second alarm. But it didn’t really matter because: Friday. No office on Friday. 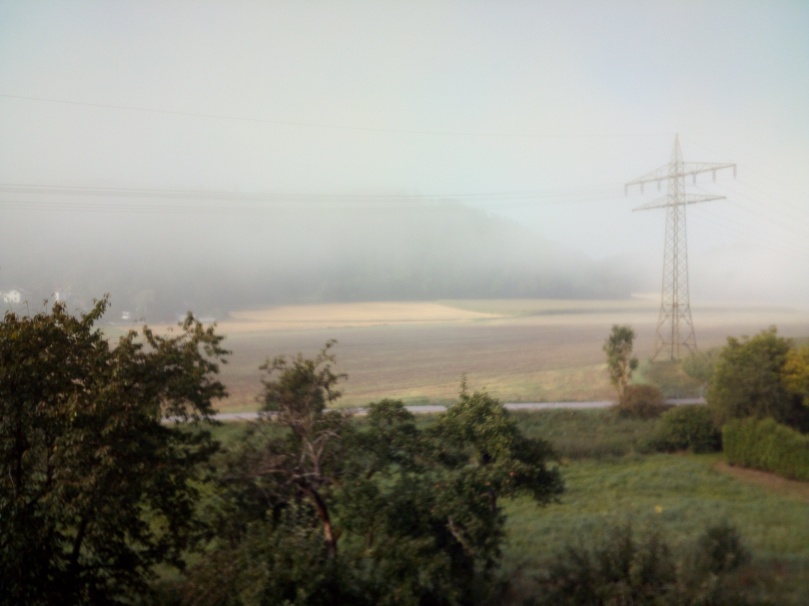 The morning walk with Curious Dog was very pleasant. It was cold, but sunny and promising real warmth later. We’re having beautiful early fall weather. But it was cold enough that I had my first experience of “frozen ears”. For some weird reason my ears are quite sensitive to cold. I’m going to try wearing a light woolen hat tomorrow morning (that will probably be overkill). Today it was only ca. 7°C. It’s cold in the mornings because the nights are clear, there’s no cloud cover.

I meant to get up early to have time to bring some old books and crockery to the Caritas Secondhand shop in the nearest bigger town and go grocery shopping and take the garden rubbish to the local collection point. But I changed my mind about the Secondhand shop. The old books are not in good enough shape, I think, and they are mostly nothing special. It’s probably better to throw most of them into the paper recycling bin. They are from my grandma and are quite musty and mildewy. Only a few are worth keeping or selling. And getting rid of the crockery isn’t urgent. Mum wants to have my cousin look at it when she visits in October. Maybe she’ll be happy to have some of it.

I spent a relaxed afternoon rereading Louise Erdrich’s Tracks. I finished the first read on Thursday, but it’s so good and so dense, I felt it needed another read before I can write a review. It’s only slightly longer than 200 pages but there’s a lot of plot and character development in those pages. Many passages with important info easy to miss on a first reading. Although I often reread books, I don’t usually reread straight after finishing one. This novel is still engrossing on the second read.

I made the mistake of looking at my work emails and found that an issue that was supposed to have been running smoothly has suddenly exploded into a gruesome mess requiring a horrid escalation meeting next Monday. Involving inter-departmental politics. Sigh. That particular issue was already escalated a month ago and should have been solved but has somehow popped up again. Not exactly a great start for next week. But at least there’s still the weekend between now and Monday.

Last night, I dreamt that at work we had such huge parking lots around our office buildings that helicopters were used to shuttle the employees to their office buildings. The helicopters had a kind of cage around the cockpits where people, exposed to the elements, hung on while the pilots flew them where they needed to go. I was the last one to be dropped off on one shuttle trip. The pilot forgot I was still hanging on, and started doing aerobatics, looping the loop and such things, until I knocked on the cockpit roof to let him know I was still there. Then I woke up. Very odd.

In contrast to my usual laziness on holidays, I was amazingly effective in the morning. I baked muffins while my partner and Curious Dog were off walking, and then cleaned all the floors on the ground floor: kitchen, loo, hall, and living-room. All of that before lunch.

For lunch my partner cooked cream of pumpkin soup (one of his specialties), which was perfect. Probably it’ll be the last one until Autumn. We like pumpkin soup, but not usually in Summer. It was a fitting soup finale!

In the afternoon, we watched The Shape of Water, which we have on blu-ray. It was ok but I kind of expected something else. I thought the water person was really made of water, not some man with gills. But the relationship between the water person and the mute cleaner was very touching.

I also had a lot of time for reading (currently reading The Overstory, by Richard Powers). I walked with Curious Dog, a fairly long route, uphill, over a bridge, through fields, and then back down to the town through the woods. They’ve done a lot of logging recently. When we returned, an Italian ice-cream van was just stopping right in front of our driveway. We all had the first Italian ice-cream of the year. I had yoghurt and blueberry. Sadly, the blueberry wasn’t as good as the ice-cream we used to get at our last place. The van was from one of the neighbouring villages, but there’s an ice-cream parlour here in town, too. We’ll be trying that out soon.

After dinner, we started watching the second season of The Bridge, a Danish/Swedish co-produced TV crime series. The second season seems to be about eco-terrorism, but who knows what other ramifications will occur. One of the main characters is an autistic police detective. It’s riveting.

I was so busy all day, with house-cleaning and more pleasant occupations that I almost didn’t have time for my meditation practice, but I managed half-an-hour. One would think it’d be easier to find time to sit on holidays, but in reality they disrupt normal habits. I shall try to do better tomorrow. But 30 minutes are better than 5, or none at all!

I enjoyed getting so much done early in the day, while still having time to hang around reading and watching series. Hopefully, I will remember this, and repeat it on other weekends.

This morning I woke up straight out of a dream, a very weird one about house-hunting. In it, I met up with an estate agent who took me to see an apartment. It was a very big one, with lots of bathrooms (one with a shallow tub the size of a double bed, one with an extra deep tub, dark green). There was lots of marble and the apartment was totally open plan and all on one level. The odd thing was that the biggest main room turned into the shop of a car dealer’s, with just a different floor pattern to mark where the apartment ended, and the shop began. Very weird.

Then the estate agent told me a cat came with the apartment, and I told her that wasn’t a good idea since we had a dog. And then, she took me out to lunch with the landladies, who were two older American women who wanted me to sign the lease straight away. It was €2400 per month without utilities. Much too expensive for me, of course. First, I prevaricated, saying that I needed a night to think on it, but in the end, I told them that it was too expensive and that nobody wanted to share their living quarters with a car dealership. That’s when I woke up. How odd!

Maybe it was a kind of flashback to when I was house-hunting last year, except that I never had dealings with an estate agent (much too expensive). All the houses I viewed I found online and dealt with the landlords or ladies directly. And I anyway only looked at two, the second one is the house we’re living in now.

I didn’t do much else except that I took Curious Dog for his three daily walks and that I baked a few oat cookies. They turned out ok, but could have done with some chocolate chips, which I didn’t have. Did a bit of reading, and meditating, and talking on the phone with my partner. 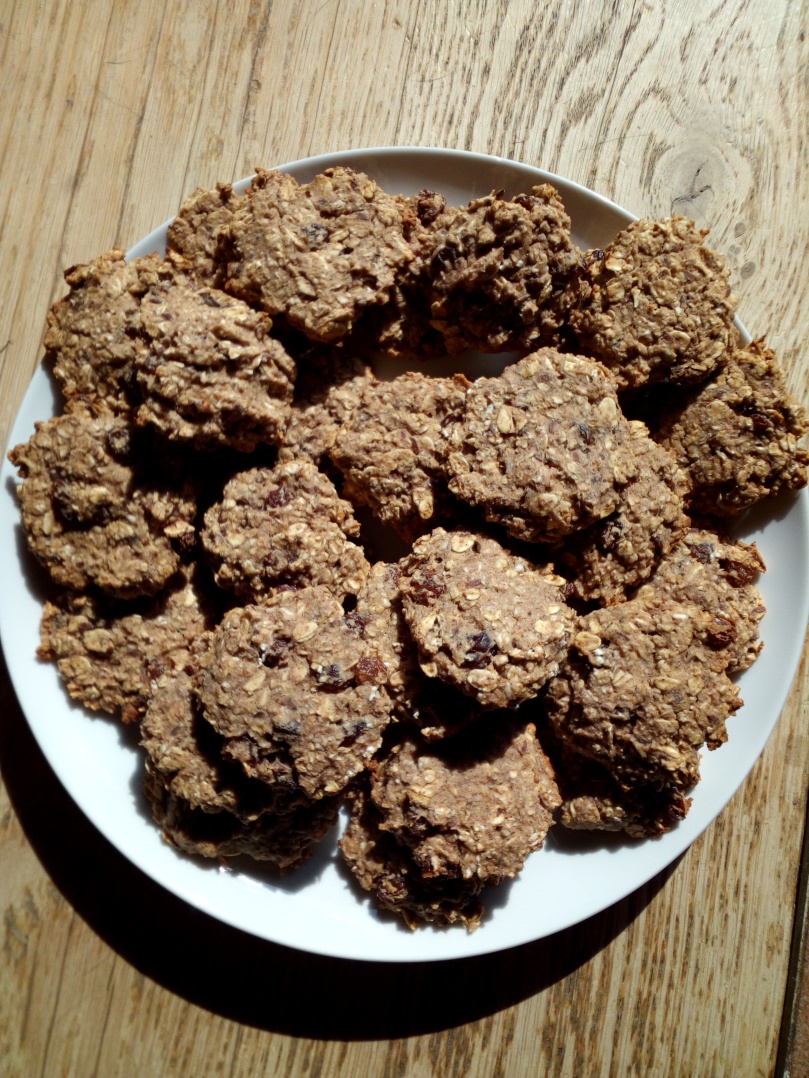 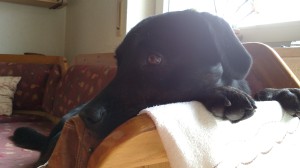