A couple of months ago, I read the collected short stories of Flannery O’Connor and found them very odd and not much to my taste although her work seems to be universally lauded. Today I watched a booktube video where a reader was talking about the short story “A Good Man Is Hard to Find” and explaining how the characters in the story (at least two of them, the grandmother and the misfit) give each other grace, the Christian kind of grace, where grace isn’t something fluffy and easy. I could follow the argument, but it clarified for me why I still don’t like O’Connor’s short stories. For one thing why should grace be transferred violently? What’s the point of finding grace or growing in grace if it comes at the cost of a violent death or some other kind of violence? There must be better ways to grow as a person or in one’s faith. I’m also not a fan of bigotry and ignorance for which there doesn’t seem to be a way out. Most of the characters in O’Connor’s short stories are ignorant bigots and many of them come to a bad end, or commit violent deeds, without there being, in my mind, much sense to it apart from pointing out that bigotry and ignorance exist. Where is the way out, the light at the end of the tunnel? Or is that what readers are supposed to ask themselves? Maybe the stories are too subtle for me and I need to grow as a reader before I can appreciate them, but I’m not sure. Maybe I’ll revisit her writings at some point in future. I’m grappling with this author.

There’s also an interesting article in the New Yorker by Paul Elie about O’Connor’s racism, as revealed in her letters and in her writing, and how it was ignored or explained away by critics and readers who revered her. She was a product of her times, of her society it was said – but then, so were a lot of her contemporaries, who actively fought against racism and for civil rights. It’ll be interesting to see if and how her oeuvre will be reappraised in the face of this new or reawakened criticism. I’m not saying that her work has no value (even if I struggle with it) and I’m also not saying that her work shouldn’t be read. But perhaps it should be looked at with open, skeptical eyes. Who knows what insights may be found this way? 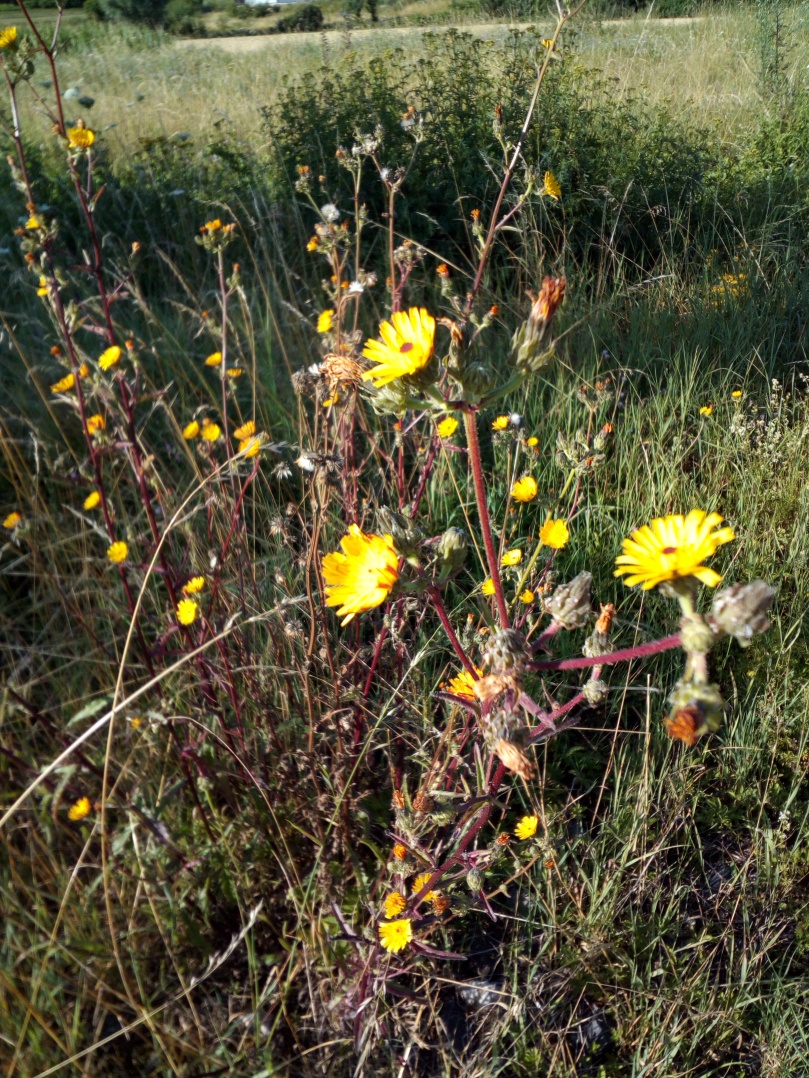 Personally, I’m always skeptical about excusing famous writers (or statesmen, or artists) who are venerated for their works while problematic parts are explained away as “being of their time”. For instance, when reading the works of ancient Greek or Roman writers, I often stumble over their dismissal of women and slaves. How much of a genius can you be if you can’t see that women and slaves are humans, with the full human potential? Is it only women readers that ask themselves such questions? Surely not. Knowing that these ancient Greek and Roman writers were wrong about half of humanity makes me skeptical of the rest of their work and certainly disinclined to venerate them even if they laid the foundations of Western Civilization. I do see the great points in their works, but I’m saddened (or incensed, or disappointed depending on my mood) by their selective blindnesses. Maybe this awareness that it’s so easy to get fundamentals wrong is why I have never, even as a teenager, been able to be an unquestioning fan of anybody. Or maybe it’s because I’ve always struggled with German history; with the question of how Germans could blindly follow Hitler.

More mundanely, today I continued reviewing and updating my documents at work, and got ahead as planned, despite a few boring meetings. Tomorrow I have hardly any meetings and hope to get at least one more document done. I also went grocery shopping for the week and had a lovely, sunny, and cool morning walk with Partner and Curious Dog through the woods. I had a nice chat with a work colleague and friend, catching up on private matters, and got a parcel delivered with a couple of new trousers, both of which fit. Very positive, that. I hate sending back clothes that I’ve ordered online or from a catalog, it’s such a bore.

Had another nice walk through the fields in the evening. It was still quite warm, but not yet awfully hot as it will be in the next days if the weather forecast proves true.

Here’s the books, short stories and poetry I read in May:

Helen Gardner (ed.) The New Oxford Book of English Verse
I’m up to poem number 583 in this anthology. I’m still enjoying it very much and I’m still doing my reading each morning in bed, when my partner is blocking the bathroom. A nice way to start the day. I mark the poems I especially like with a sticky note, so that I can later revisit them and maybe search out some more of that poet’s work.

The Sick Rose
O rose, thou art sick!
The invisible worm
That flies in the night,
In the howling storm,

Has found out thy bed
Of crimson joy,
And his dark secret love
Does thy life destroy.

Alfie Kohn, Unconditional Parenting: Moving from Rewards and Punishments to Love and Reason.
Very good and eye-opening book about parenting which should also be useful for teachers and everyone who deals with children. Wow, I sure did some things wrong in my relationship with my god-child and her sister. I very highly recommend it.

Thi Bui: The Best We Could Do: An Illustrated Memoir
This graphic novel is about the Bui family and their flight from Vietnam as boat people and how they fared in America. It also tells the life stories of the parents. The art is beautiful and the story is very interesting. I recommend it.

So, I managed to reach my goal in May and even read some extra books. Had a good reading month and can recommend most of the books I read. 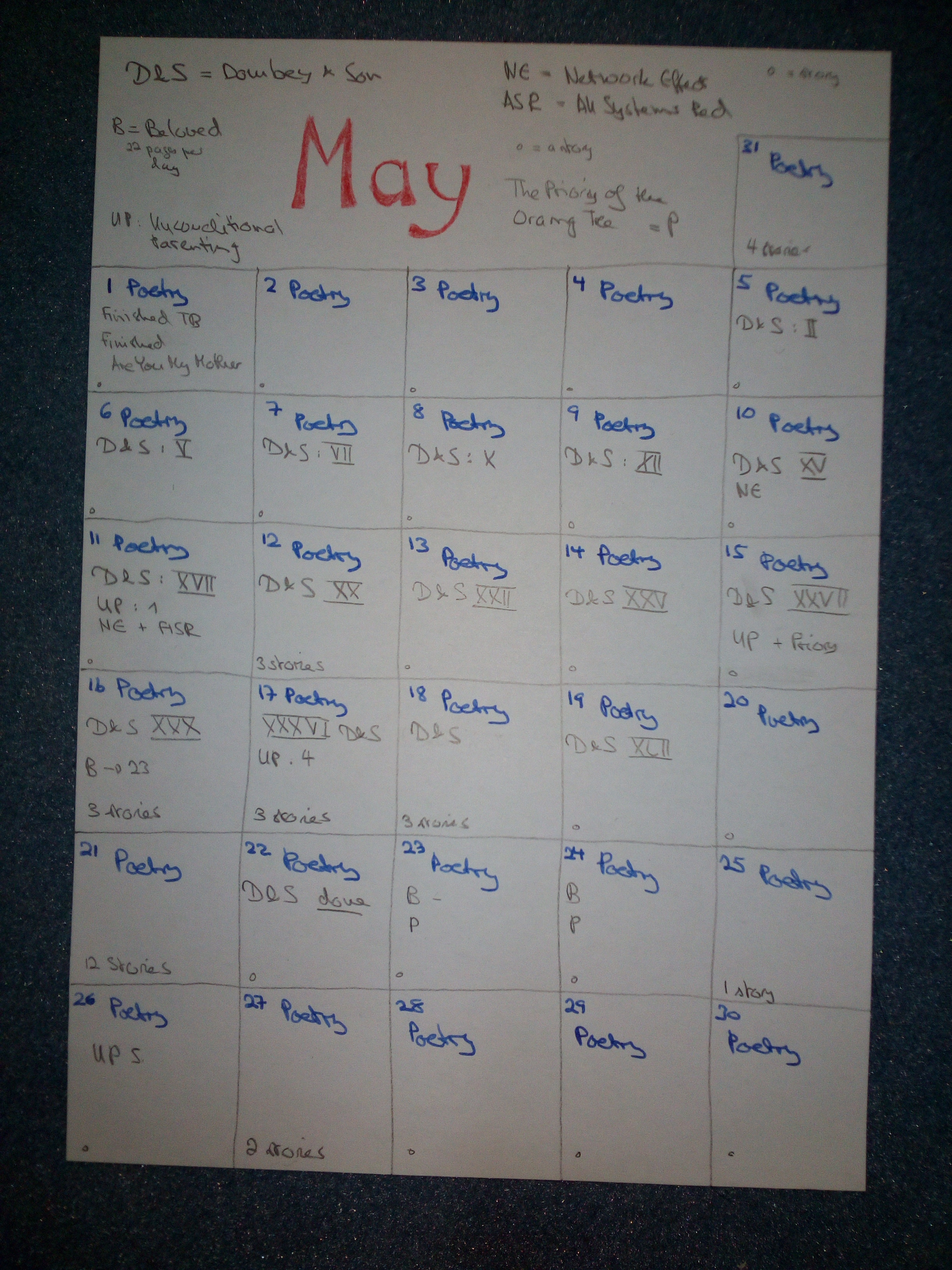