Considering that February was a short month and I wasn’t on vacation as I was in January, I managed to read quite a lot:

Murasaki Shikibu and Royall Tyler (trsl.), The Tale of Genji.
I managed to read the first 100 pages that I should have read in January. It’s fascinating, but also very strange – a completely unfamiliar world for a European reader, like me, without much knowledge of Japanese culture and history.

Rudyard Kipling, The Man Who Would Be King: Selected Stories of Rudyard Kipling.
Most of these stories just blew me away, they were so good. I was skeptical when I started as I expected stuff about “the white-man’s burden” and other imperialist rubbish, but these stories are not only set in India (and those that are, aren’t about those ideas). There are some powerful stories with fantastic elements, some stories set during WWI, lots of stories set in England. Some of them are almost gothic. The more of them I read, the better they got. My prejudices where just that, prejudices. Kipling was given the Nobel Prize in Literature and I guess these stories illustrate why. I think I’ll write about a few of them in more detail in a later post. A strong recommendation!

Non-Fiction:
Lynne Sharon Schwartz, Ruined by Reading: A Life in Books.
A short book about the meaning of reading in the author’s life. Thought-provoking and interesting for fellow life-long readers.

I wasn’t meaning to read a graphic novel, but this turned out to be the February selection of the Goodreads “Read Around the World” group. It is about the life of a group of teenage girls a suburb of the city of Abijan in the 1970. Abijan is the largest city of the Ivory Coast (the Republic of Côte d’Ivoire). Some of their experiences are incredibly like teenage experiences in Europe and America. I say “incredible”, because we stupidly always seem to see the African experience as somehow different, usually negatively different. This is, of course, a stupid view and this graphic novel helps to break it up. These universal teenage concerns about school, family, relationships, careers take place in the specific cultural space of Yop City (the suburb) at a certain point in time (the 1970s) and so the details of their lives are different to, say, my teenage experience. I found these cultural specifics engaging and enjoyable. I now feel the need to read the sequel of this graphic novel, as the first part ends rather abruptly, leaving stories unfinished.

In sum it was a good reading month. As for reading from my TBR, I had had Angle of Repose on Kindle since December 2018, so I guess that counts. On the other hand, all the other novels (except for the Laurie R. King ones) and the non-fiction book were new, so I’m not making much inroads on my collection of unread books.

As in January, I’m planning to write more detailed reports on some of the books I read (hopefully in the next few days).

Last week was quite eventful (at least compared to other recent weeks) regarding work and the weather. At work we had a team meeting where we discussed our projects of the year and how best to divide things up amongst the team members. I’d been dreading it, because feared that it would be awfully tedious and that I’d end up with a horrid new project. It actually wasn’t bad. The meeting itself was productive with hardly any boring discussions. I did end up with the project coordination job that I had almost volunteered for ahead of time because it seemed to fit in well with my other tasks, but I also got to drop a couple of small projects that I hadn’t cared for anyway, so that was almost a win. Almost, because the project I’m supposed to coordinate appears to be extremely chaotic and there’s a high risk that it won’t keep to its schedule. Also, not much support from project management, because there doesn’t seem to be a dedicated project management. Apparently, it’s a strategically important project that’s supposed to run itself. If that sounds crazy, it is crazy. Recipe for disaster. I really don’t understand how these things keep happening. I’ve had quite a few such projects in my work experience. Sometimes they work out, often they don’t. Perhaps it will flub its first project milestones and then get reorganized – one can always hope. I already had my first meeting last week to learn what I am supposed to do and what the boundary conditions are, and when I heard about all the unclear responsibilities, I kind of regretted not declining the project and spent a bit of a sleepless night, but I’ve got used to the idea in the meantime. At least it should be interesting. 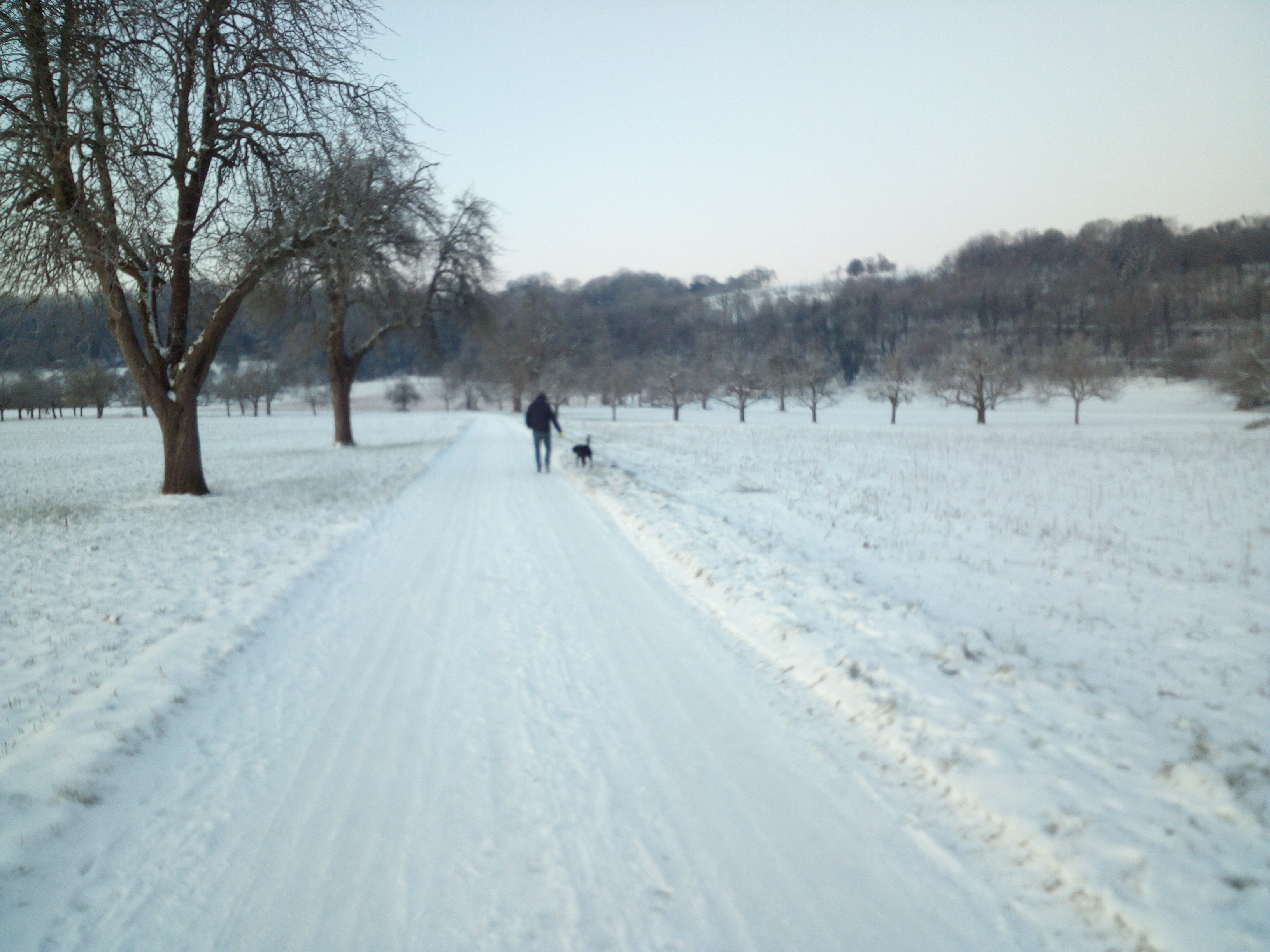 Regarding the weather, we had a very cold week and a half. On some nights it got down to -15°C. We also had a bit of snow, about 10 cm, which hardly melted as it stayed cold during the days (around -4°C on average). When it wasn’t snowing, it was sunny with a freezing wind from the Northeast. In the North and middle of Germany, there was much more snow and it caused traffic chaos. At my cousins’ place, they had 50 cm of snow and -20°C, which hasn’t happened for I don’t know how many years. They did an experiment: throwing a cup of boiling water into the air and watching it come down as fine feathery snow (apparently this only works at these low temperatures). The snow was lovely and feathery, very small crystals, not soggy at all. It squeaked underneath our boots when we went walking. As it only snowed once or twice here, the snow on all the paths was trampled flat and grew very slippery. Rather dangerous with Curious Dog’s great talent for pulling on the leash. So, I tried out my new spikes for my Winter boots. They are a kind of rubber sole with spiky screws on the underside that are attached to one’s boots with Velcro fasteners. They worked great on flattened snow and ice; CD could pull all he liked. I got them three years ago and this year was the first chance I had to try them out. I had older ones that I used last month in Bavaria. They belonged to my Dad, but they are not as good as the new ones. It was fun walking with them on my boots. I went on a few nice long walks with Curious Dog in the afternoons. In the mornings, we only walked for about half an hour, as it was too cold for longer walks. He is, after all, an inside dog, not used to such temperatures. Neither am I.

This week the Winter interlude is ending, temperatures are rising, and I guess we’ll end up with the same old wet and muddy conditions we had before (apparently the U.S. is now affected by unusual cold weather in unusual places). 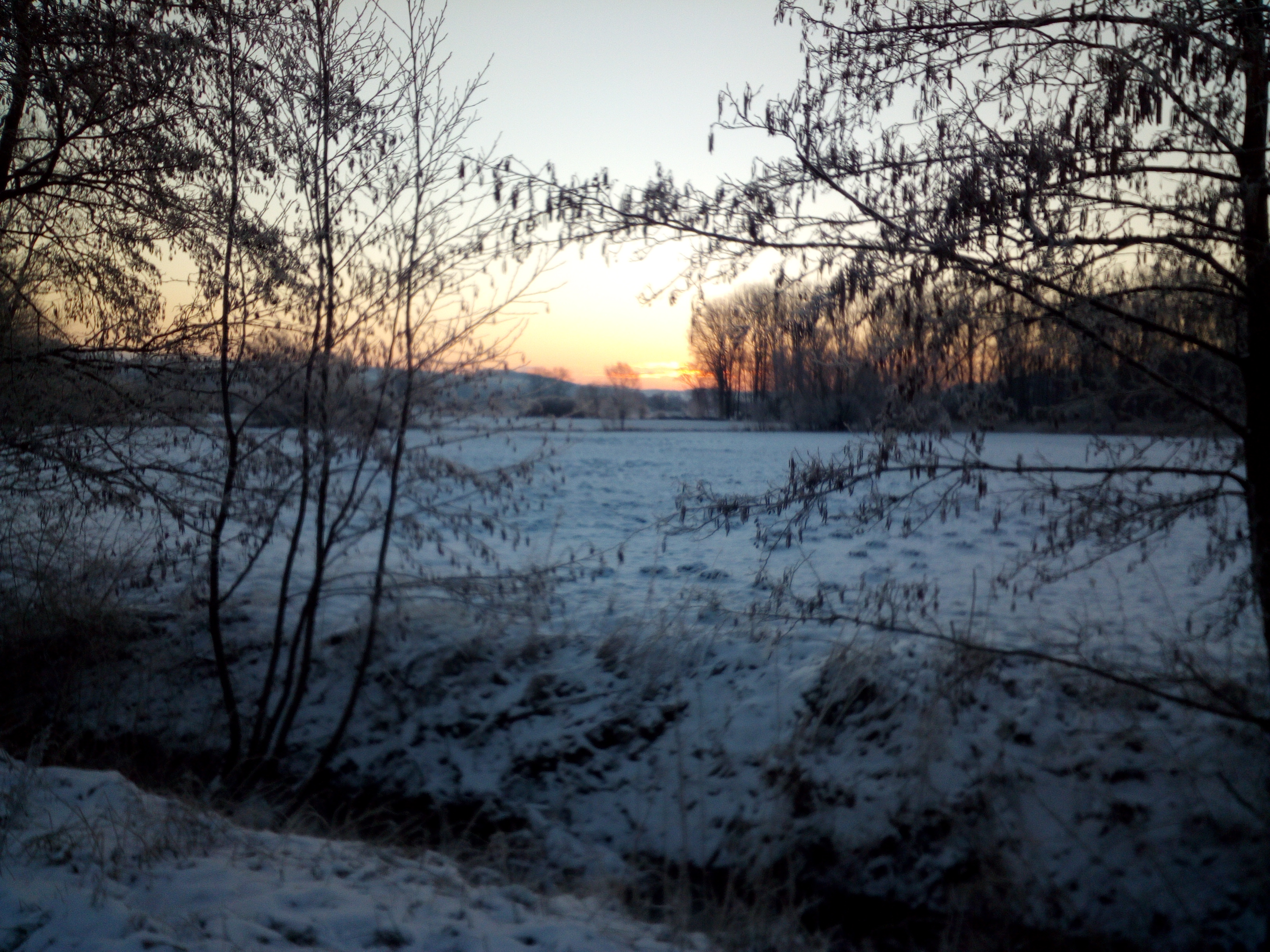 The only thing I didn’t like about the weather was the cold wind that kept causing my eyes to tear up when we were walking and the fact that the sunny weather gave me a headache for a couple of days. Somehow highs in Winter sometimes don’t agree with me. On Friday, my day off, I woke up with a headache that then made me feel queasy. But it went away after the morning walk and an aspirin. The weekend was otherwise rather ideal. A lot of time for reading and meditation. On Friday I did half of the shopping, on Saturday the other half. I also managed to clean the bathroom on Saturday (including cleaning the partly blocked drain in the bathroom sink – revolting) and I read two books. That made me feel quite accomplished.

One book was a crime novel, The Dry, by Jane Harper. It’s set in Australia in a small farming community much affected by drought. It’s about a multiple murder/suicide that’s unofficially investigated by a policeman friend of the victims who had a shared history with the suspected murderer. Very atmospheric and full of suspense, although I did get an inkling about the real motive for the murders before it was revealed. This is quite odd for me. Usually I never work out the mystery ahead of the reveal. I read this book for my book club very quickly because it was so thrilling. I started reading on Saturday morning and finished it early in the afternoon. Then, after doing a bit of cleaning, I started reading The Uncommon Reader, by Alan Bennett. A slim book about the power of reading, which took me only about an hour and a half to finish. It gave me the warm fuzzies. This book was recommended by Steve Donoghue on BookTube: https://www.youtube.com/watch?v=A3DjZDZaBaQ.

On Sunday, I did a bit more housework and continued reading my poetry anthology, my current short-story collection, and Wallace Stegner’s Angle of Repose, which I’ve been reading for a few weeks (it’s a reread, very good). But I will write in more detail about my reading when I tally up my books for February.

I also managed to prepare two book review posts which I will post later this week and watched another couple of episodes of Star Trek: Lower Decks with Partner. Partner cooked a new-for-us dish, a celeriac risotto flavoured with capers and sage. Sounds strange but was delicious. Today, Partner’s cooking another new dish, fennel with mango on basmati rice. I’m sure it will also be very nice. It’s great that Partner has become such an adventurous cook. If it were up to me, we’d be repeating the same few dishes all the time.

This week we will be off to Bavaria again (three weeks pass so quickly). My book club will take place later this week, but since it’s a Zoom meeting, I can join from anywhere. One slight upside to the Corona restrictions. Regarding Corona: the numbers in Germany are still improving, but the lockdown remains in place because of the danger of the mutated version of the virus. There are even border checks on the borders to Austria and the Czech Republic because they are so very badly affected by those mutated viruses. Not sure if it will be possible to keep those mutations from gaining more ground in Germany than they already have. Still a very uncertain situation.